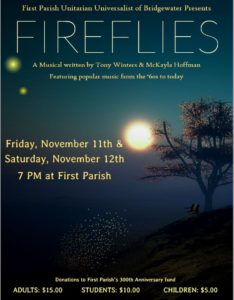 Fireflies is the story of a brother and sister, Atlas and Amelie, who find they are having a hard time trying to deal with each others’ personalities. But when Atlas realizes that Amelie is acting strangely and tries to drag her into the light with the help of his support group, all goes awry and Atlas is forced to learn a lesson from long-forgotten memories of his childhood.